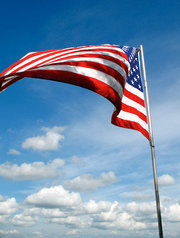 America’s Birthday is also celebrated in Denmark, Norway, Sweden, and England. In Denmark, where people listen to songs and speeches about the friendship between the United States and Denmark, the celebration is known as ‘Rebildfest.’

Delaware’s delegation to the Continental Congress put a unanimous endorsement of the Declaration at risk. Delaware delegate George Read was adamantly opposed to the Declaration (many still harbored an affinity for Great Britain and others feared for their careers and the fate of their families), while fellow Delawarians Thomas McKean and Caesar Rodney favored its adoption. Yet it appeared that Rodney, who was suffering from terminal cancer, might arrive in Philadelphia a day too late to break the Delaware delegation’s deadlock. However, the insistent Rodney rode all night through darkness, lightning, and thunder to arrive just in time to cast his affirmative vote, without which the Declaration would not have been unanimous.

Up until Henry Ford and his millions of cars came along, the Fourth of July was traditionally the most miserable day of the year for horses, tormented by all the noise and by the boys and girls who threw firecrackers at them.

July 4th, a legal holiday in all U.S. states and in U.S. territories overseas, is one of the few holidays that has not been moved to the nearest Friday or Monday.

The word ‘patriotism’ comes from the Latin patria, which means ‘homeland’ or ‘fatherland.’

The Declaration of Independence was first:

• Read to the public in Philadelphia at noon on July 8 (where, according to one observer, there were few
‘respectable’ people)

• Read in New York ‘in a clear voice’ on July 9, by order of General George Washington

• Read in Boston, accompanied by church chimes and the firing of cannon, on July 18

In Williamsburg, the colonial capital of Virginia, Independence Day is actually celebrated on July 25, because news of the adoption of the Declaration in Philadelphia did not reach Williamsburg until three weeks after July 4, 1776.

In the 1890s, it was customary to celebrate July Fourth with two parades: in the morning, a ‘Horribles’ parade of men and boys dressed in fantastic costumes made noise with all sorts of devices; and in the afternoon, a second parade featured military veterans and members of various local organizations.

The names of the signers of the Declaration of Independence were withheld from the public for more than six months to protect the signers. If independence had not been achieved, the treasonable act of the signers would have, by law, resulted in their deaths.

You can get a printable version here