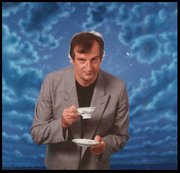 He attacked everything in life with a mix of extraordinary genius and naive incompetence, and it was often difficult to tell which was which.

Humans are not proud of their ancestors, and rarely invite them round to dinner.

I love deadlines. I like the whooshing sound they make as they fly by.

I may not have gone where I intended to go, but I think I have ended up where I needed to be.

In the beginning the Universe was created. This has made a lot of people very angry and has been widely regarded as a bad move.

It is a mistake to think you can solve any major problems just with potatoes.

It is no coincidence that in no known language does the phrase ‘As pretty as an Airport’ appear.

Life… is like a grapefruit. It’s orange and squishy, and has a few pips in it, and some folks have half a one for breakfast.

The ships hung in the sky in much the same way that bricks don’t.

Time is an illusion. Lunchtime doubly so.

You live and learn. At any rate, you live.

Human beings, who are almost unique in having the ability to learn from the experience of others, are also remarkable for their apparent disinclination to do so.

The last time anybody made a list of the top hundred character attributes of New Yorkers, common sense snuck in at number 79.

He felt that his whole life was some kind of dream and he sometimes wondered whose it was and whether they were enjoying it.

Nothing travels faster than the speed of light with the possible exception of bad news, which obeys its own special laws.

Ah, this is obviously some strange usage of the word ‘safe’ that I wasn’t previously aware of.

Anyone who is capable of getting themselves made President should on no account be allowed to do the job.

Space is big. You just won’t believe how vastly, hugely, mind- bogglingly big it is. I mean, you may think it’s a long way down the road to the chemist’s, but that’s just peanuts to space.