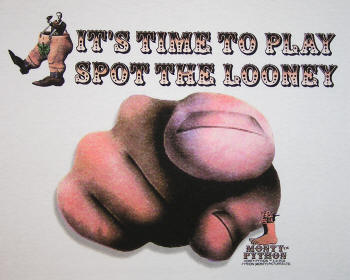 Much to his Mum and Dad’s dismay
Horace ate himself one day.
He didn’t stop to say his grace,
He just sat down and ate his face.
“We can’t have this his Dad declared,
“If that lad’s ate, he should be shared.”
But even as he spoke they saw
Horace eating more and more:
First his legs and then his thighs,
His arms, his nose, his hair, his eyes…
“Stop him someone!” Mother cried
“Those eyeballs would be better fried!”
But all too late, for they were gone,
And he had started on his dong…
“Oh! foolish child!” the father mourns
“You could have deep-fried that with prawns,
Some parsley and some tartar sauce…”
But H. was on his second course:
His liver and his lights and lung,
His ears, his neck, his chin, his tongue;
“To think I raised him from the cot
And now he’s going to scoff the lot!”
His Mother cried: “What shall we do?
What’s left won’t even make a stew…”
And as she wept, her son was seen
To eat his head, his heart, his spleen.
And there he lay: a boy no more,
Just a stomach, on the floor…
None the less, since it was his
They ate it – that’s what haggis is.

I’ve a Gouse and Harden in the country
An ace I call my plown,
A treat I can replace to
When I beed to knee alone.
Catterfly and butterpillar
Perch on beefy lough
And I listen to the dats and cogs
As they mark and they biaow.
Yes wature here is nunderful
There is no weed for nords,
While silling by my windowflutter
Biny little tirds.

Immanuel Kant was a real pissant
who was very rarely stable.
Heidegger, Heidegger was a boozy beggar
who could think you under the table.
David Hume could out consume
Wilhelm Friedrich Hegel,
And Wittgenstein was a beery swine
who was just as sloshed as Schlegel.

There’s nothing Nietzsche couldn’t teach ya
’bout the raisin’ of the wrist.
Socrates himself was permanently pissed.

John Stuart Mill, of his own free will,
after half a pint of shandy was particularly ill.
Plato, they say, could stick it away,
‘alf a crate of whiskey every day!
Aristotle, Aristotle was a bugger for the bottle,
and Hobbes was fond of his Dram.
And Rene Descartes was a drunken fart:
“I drink, therefore I am.”

Yes, Socrates himself is particularly missed;
A lovely little thinker, but a bugger when he’s pissed.